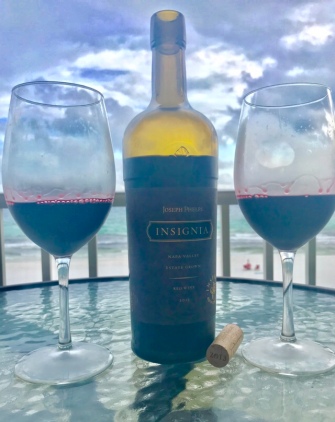 This is a bucket list item right here. In full disclosure, this was really a Christmas  gift from my husband. But here’s thing about a bottle of wine like this, once you have it, it becomes a “thing.” It requires thought and planning –  an appropriate event to drink it and determining if you should hold onto it for years or just go ahead and drink it.

Well, if you’ve been keeping up with my posts this year, you know I’ve had a  year of  great loss – a constant reminder that tomorrow is never promised.  Add turning 50 to that frame of mind and well, I decided that I was popping the cork on this wine.

I believe that wine is always a multi-sensory experience – including preconceived biases (unless you are tasting blind). For me, knowing a bottle retails for $250, my expectation was that it should be the best thing that’s ever cross my lips. But, I also wanted to not be impressed with this wine, because let’s be honest, it’s not something I can easily afford. I tried very hard to be completely objective, but as I smelled the first wafts of this very expressive bouquet, I knew I was done for.

Deep, dark  fruit,and vanilla are the first aromas I noticed. This wine smells lush. And lush is a good description for how it feels on the palate. Incredibly dense dark fruit flavors with mocha notes and the tiniest bit of spiciness that lingers for days. I always roll my eyes when people use the word structure to describe a wine, but after drinking 50th Birthday Wine #2 and this one, I have to say I think I get it. This wine has structure and it feels like silk dancing across your tongue.  Sigh…..

The vintage is 2013 and the blend is comprised of 88% Cabernet Sauvignon, 5% Petit Verdot, 3% Merlot, 3% Malbec and 1% Cabernet Franc. The wine maker’s notes tell us the grapes were harvested  between September 13th and October 15th.  The grapes were fermented in 100% new French oak for 24 months and bottled in January of 2016.

Joesph Phelps died in 2015, but he was one of the original winemakers that made Napa Valley renown for world class wine. The Insignia label represents his his devotion to the art of blending wine. He created the Insignia brand to represent the very best of what he could produce from all of his vineyards, originally thinking that in some years this might even be a white wine. The name Insignia allowed him the flexibility to use whatever grapes he wanted in each cuvee. It just so happened that in 1974, his first vintage, he felt that it was Cabernet Sauvignon. In 1975, the blend was Merlot dominate. By 1977, it was clear that the Bordeaux varietal grapes (Cabernet Sauvignon, Merlot, Cabernet Franc, Petit Verdot, Malbec) were grapes that thrived in Napa Valley and Insignia has been a Cabernet Sauvignon dominant blend from 1977 on.

We didn’t finish this bottle for a few days – I think my husband and I were both subconsciously trying to milk it out for as long as we could. When we were down to the last glass – which we shared – it had been a couple of days since the bottle was opened. I smelled – hoping maybe this time I wouldn’t think it was the best thing I’ve ever smelled – but no, there it was again. I took a tiny little sip thinking, it’s been a couple of days, maybe it’s not as good as I remember, but no, it was. I actually said to my husband that I think they put something addictive in here.

At $250 a bottle (full disclosure, my hubby bought this one at Costco for $198 – but still), this may in fact be the only time I ever have this wine. I’m trying hard to heed the words of Dr. Seuss, “don’t cry because it’s over, smile because it happened,” but I’m also saving my change – that should add up to a couple of hundred bucks in no time right?