It’s hard to know where to begin when writing about Yakima Valley. It’s a plethora of outstanding agricultural riches from wine – to hops – to apples – to organic produce of all kinds.

I got an in-depth overview (oxymoron?) of Yakima Valley on a pre-conference Wine Blogger’s excursion hosted by Wine Yakima Valley  It began  with pick up at the Tri-Cities airport with a well organized welcoming committee that gathered up travelers from all over the map and whisked,us away for an awesome experience they called Flavor Camp!  We filled two passenger vans, were given a scrumptious cheese plate that included dried figs and honey, and off we went. Our transportation was provided by Wineries Express. and the drivers of both vans were incredibly knowledgeable about the region, providing us with fascinating narrative along the way.

The Yakima Valley has the distinction of being the first AVA, not only in Washington State, but in the Pacific Northwest, having received the AVA designation in 1983. It is contained within the larger Columbia Valley, which received its AVA status in 1984. The Rattle Snake Hills, Red Mountain  and Snipes Mountain AVAs all lie within the Yakima Valley.

The Yakima Valley grows approximately 46 different grape varieties – the largest number of any of Washington State’s AVA. It also grows nearly half of all of the Chardonnay and Riesling grown in the state,  More than 80 wineries make there home in Yakima Valley. 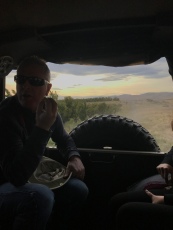 David O’Reilly and his wife Angelica, owners of Owen Roe winery and vineyards, were incredible hosts to our group of 25. We were divided into 3 groups and took turns riding out into the vineyards where David explained the soils and told us about the history of his winery here in Yakima. Owen Roe was first known for their award winning Pinot Noir from the Willamette Valley. The Yakima Valley portion of the story didn’t begin until 2005.  An icon of wine making David O’Reilly was incredibly approachable and his love of this area and the wines he produces here was infectious. (More on Owen Roe in a future post).

In welcoming all of us to the Owen Roe property, there were many other Yakima Valley wine makers who shared their wines in tastings offered throughout the afternoon and over dinner. Perhaps the most special part of this experience was the shared enthusiasm for the land that all of the wine makers seem to share together. It felt as though everyone was lifting each other up in reverence of the Yakima Valley itself. 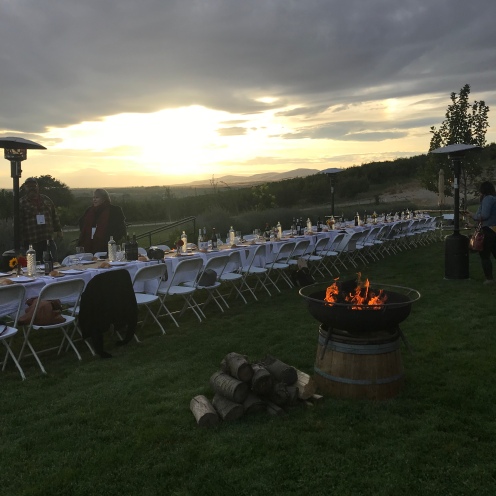 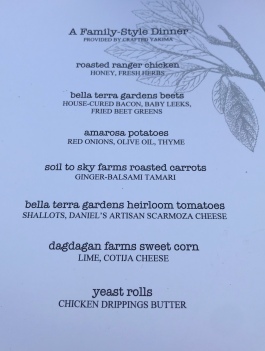 Our dinner was catered by Crafted Yakima, curated by Chef and Tasting Room Manager, Craig Singer, using all locally sourced ingredients. The food was so delicious I failed to take quality pictures, but I did get a picture of the menu – everything was as amazing as it sounds. I did not get a chance to taste through all of the wines of the local wine makers, but a few that really stood out were Wit Cellars,  Cote Bonneville and Gilbert Cellars.

The wines being produced in Yakima Valley are enough to put the area on the world wide map, but there is so much more coming out of this little area!

Did you know that you know that 75% of hops grown in the U.S are grown right here in the Yakima Valley?  In 2015 and 2016 more hops were produced from Yakima than previous top world producer Germany.

We experienced a hop class from global hop producer Hopsteiner.  Hopsteiner has been in the hop business since 1835 and has locations throughout the world, including Yakima Valley. They are leaders in research and development,. They are continually developing new breeds of hops.

I could write an entirely separate post on hops alone because it is a truly fascinating plant. It grows to 18′ feet in height and can grow up to 12 inches in a day! Its the kudzu of usable crops! We had the opportunity to taste through several beers and smell the different varieties of hops used in each of them – not only awesome – but truly educational. It was harvest season for hops as well, and we were able to smell them “drying” at several points driving through the valley.  If you like beer, it is a delicious smell! 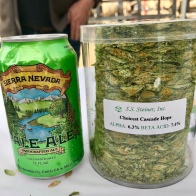 The lush riches of this valley just continue with apple production. It is said that 60% of U.S. apples are grown in Yakima Valley, and a full 90% of organic apples come from this valley. While many of these apples are the eating kind, it stands to reason that cider apples grow here as well. You can eat cider apples, but it is about the same as eating wine grapes versus table grapes, they’re just different and each is better suited for its intended purpose. This was an eye opening class on cider production in the Yakima Valley, courtesy of Tieton Cider Works.

Some of the wines produced with Elephant Mountain Vineyard grapes. 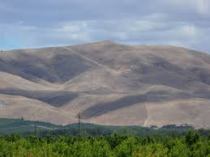 It is said that from a distance the mountain looks like an elephant that is laying down.

These vineyards are located within the Rattle Snake Hills AVA where acclaimed grower and owner Joe Hattrup grows grapes for many well known Washington wine producers. We were able to taste through many of the wines made with grapes from these vineyards, as well as taste some freshly picked corresponding grape varietals. This provided some great insight into the connection of the grapes to the finished product. Joe educated us about the intricacies of the terroir and grape growing, while Co Dinn, of Co Dinn Cellars,  spoke about the making of wine with these grapes.

I can’t write about my Yakima experience without mentioning the lovely Hotel Maison. It is a historic property that has been restored and updated throughout. The lobby and hallways are absolutely charming and the rooms are incredibly large. Our large Wine Conference group showed up at around 10:30 p.m. and the front desk was staffed by only one person. Despite the huge influx of rather noisy wine revelers, each person was checked in without the slightest bit of exasperation. The breakfast was also very nice for an included continental breakfast. The thing that will endear the Hotel Maison to me forever is the fact that I somehow managed to leave my reading tablet, and  a charger  behind when I left. The staff called me within a couple of hours of checkout and because I couldn’t return, they mailed all of the items to my house. Imagine my surprise when the box contained not  only the above-mentioned items, but also a travel size shampoo and conditioner that I had left behind as well.

As a first timer to this area, I was astounded by not only the wine but the agricultural importance of this little valley in Washington State. I was also so moved by the people I met. Everyone was so welcoming, truly wanting to share their corner of the world with everyone who visits. If you haven’t experienced the Yakima Valley and surrounding areas, you really should. It truly is a microcosm of goodness.

Full Disclosure Policy: This is the second article of three that I agreed to write in exchange for discounted registration as a Citizen Blogger for the 2018 Wine Bloggers Conference (Zephyr Conferences). Please know that if I am writing about an experience, a person or a place, it is because I felt it worthy of sharing. The conference provided more than enough content to write multiple articles, if it is not something that impressed me enough to share, I won’t write about it.