Ridge Vineyards might be one of the best kept secrets of the wine world. I recently had the opportunity to visit both the Monte Bello location and the Lytton Springs location and every time I experience a Ridge wine, I am consistently blown away.

The wine speaks for itself, but when you factor in their place in the history of American wine, their “pre-industrial” wine making philosophy, a commitment to truth in labeling, and a goal of being 100% organic in all of their vineyards, and it is a story that deserves to be told as often as possible.

Ridge Vineyards, originated in the 1960’s at its Monte Bello location in the Santa Cruz Mountains AVA, when 3 engineers from the Stanford Research Institute purchased some land and began making wine. The land had vineyards and an abandoned winery that dated back to the late 1800’s, called Monte Bello Winery. The first wine these three friends made was a Cabernet Sauvignon, from what is now known as the Torre vineyard. The first attempt resulted in a mere 1/4 barrel. But it was good. So good, that they re-bonded the existing abandoned winery and produced their first vintage in 1962.

In 1969, in what would prove to be a defining moment in history, a man named Paul Draper was hired as the winemaker. His 1971 Cabernet Sauvignon, would place 5th in the world renown 1976 event referred to as the Judgment of Paris.

The Lytton Springs property, in Sonoma County, was added to the picture in 1991. The Lytton Springs estate is to Zinfandel what Monte Bello is to Cabernet Sauvignon. Lytton Springs is an amazing piece of land with vines that date back to 1901. The property is also a true field blend – the vines are varied in varietal, planted right next to each other. Some of the vines were only correctly identified after DNA testing of grapes became available.

In 2006, for the 30th anniversary of the Judgment of Paris, a tasting reenactment was conducted, with the exact same wines that were tasted in 1976. After 30 years of aging, the 1971 Ridge Monte Bello Cabernet Sauvignon took first place. 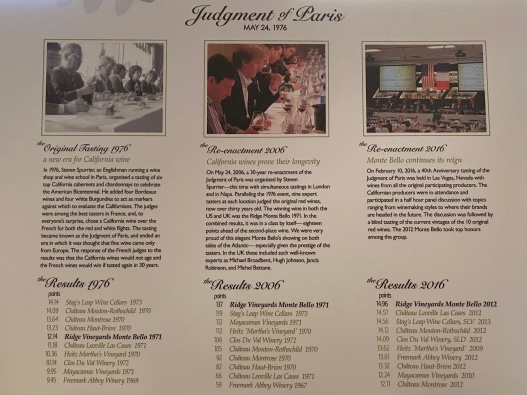 It’s hard to know where to begin. Ridge produces single vineyard varietals, from a number of locations. There are a few winemakers in California history who are credited with championing the single varietal wine from California, but Ridge is the champion of single vineyard wine making.

In keeping with their sustainable philosophy. 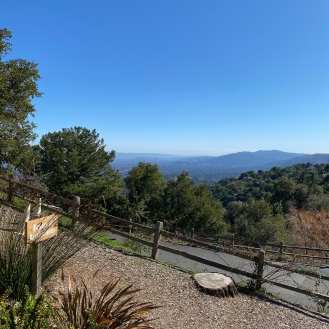 Ridge champions single vineyard wine making because they believe not only in terroir but in the philosophy that well cared for earth and vines, will result in a wine that basically makes itself.  Sustainable practices occur not only in their growing, and wine making, but in every aspect of all they do. The winery and tasting room at Lytton Springs was constructed using hay bales and vineyard clay. Solar panels supply the majority of energy used. 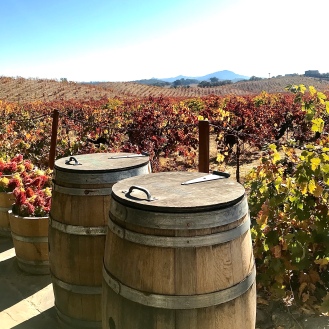 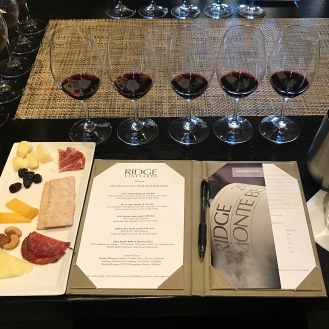 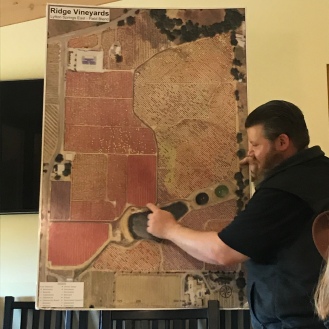 A map of the vineyards at Lytton Springs with each vine rep.esented

In 2008, they began the process of becoming organically certified in all of their vineyards. The first vineyard to reach this status was East Bench. Since that time, 80% of the vineyards at Lytton Springs have become certified organic, and the remaining 20% will be in 2021. At Monte Bello, the certification is expected by 2023.

Organic vineyard management, includes everything from compost to organic pheromones and essential oils like clove and cinnamon. Varying cover crops are planted during the winter to attract beneficial insects, as well as provide nitrogen for the vines.  You can read about all of the practices here, it’s pretty fascinating. A list of all the vineyards, including maps and descriptions can be found here.

Ridge has a genuine commitment to minimal intervention wine making – they refer to it as “pre-industrial” – meaning it is done the way it was done prior to Prohibition, before large scale production became the norm. That’s not to say Ridge is not a large scale producer, they produce a lot. They just do it  differently.

The wines are fermented using only indigenous yeasts, with the goal of not adding anything other than what the grapes provide. They do add small amounts of sulfur when necessary – this is what prevents the wines from being labeled as organic, despite the organic grapes. You may know that labeling laws require sulfur to be identified at 10 ppm in the U.S., and current U.S. organic guidelines follow that same amount.  It is interesting that the European Union’s organic guideline is actually 100 ppm – 10 times that of the U.S. Sulfates in Ridge wine usually come in somewhere around 40-50 ppm – in Europe that would carry an organic label. Something to think about next time you grab your favorite Old World bottle labeled organic. 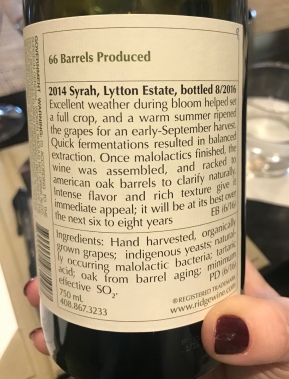 Organic vineyards, pre-industrial, minimal intervention wine making, a significant role in the history of California wine, and one more thing that I have such mad respect for –  truth in labeling.  Ridge is going to list every single thing that is in your bottle, because they not only believe in what they are doing, they believe the consumer has the right to know. I like to know the story of my wine, and its all right there, I don’t have to look anything up, or go looking for a tech sheet.

Paul Draper retired in 2016, after 47 years at the helm of wine making. The current wine makers, John Olney at Lytton Springs, and Eric Baugher at Monte Bello have been with Ridge for decades, learning the ropes from the OG himself. I hear that Paul Draper might be retired but he is still spotted almost daily somewhere at Ridge. Vineyard Manager, David Gates, deserves special mention as he is the man that is responsible for bringing the fruit to the press.  Ridge is the largest organic grape grower in both Sonoma County and the Santa Cruz Mountains.

This article would be lacking in factual data if I did not tell you that the ride up to the tasting room at Monte Bello is an adventure all by itself. You are driving to the top of a mountain, on a twisty, turning, narrow road, only to be greeted by a sign that says “Beware of Rattlesnakes,” where you will realize that you are literally sitting on the San Andreas Fault at 2,400 feet elevation. I still highly recommend a visit. Personally, I would walk to the top if it was the only way to get a sip of Ridge Monte Bello.

I hope the immediate future includes you becoming familiar with Ridge wines if you are not already. I have never opened a bottle of Ridge that didn’t truly knock my socks off. They do things differently and it absolutely comes through in the wine.

Even with this commitment to organic grape growing and sustainability, Ridge never exploits this fact as a marketing tool. It is simply a philosophy that they believe in. Take care of the earth, take of the vines, and the wine will be the best expression of itself that it can be.

Speaking of futures, we recently purchased our first wine futures! The 2019 Ridge Monte Bello Cabernet Sauvignon will be making its way to our door sometime in 2022! It kind of stinks to pay for wine you can’t drink yet, but hey, getting wine I can’t remember paying for is going to be pretty awesome!