Wines You Can’t Afford to Miss is an event through the Atlanta Wine Meet Up with such an absolutely brilliant concept that I had to write about it. Occurring on a roughly monthly basis, the concept is this: Everyone brings a wine of a least $50 in value for whatever varietal or region is the “topic” of that night. The event is limited to 20 people and so you get to taste 20 wines that retail north of $50 in value.

I attended my first WYCAM last month and the belle of the ball was Cabernet Sauvignon. It could be from anywhere, but had to be 100% Cabernet Sauvignon. Since I used to have what I lovingly refer to as “obsessive cab disorder” I was more than a little excited to attend this event.

There ended up being 18 wines to taste, talk about, and score. Each person in attendance gave some information about their wine — some were intimately familiar with the wineries they chose, while others (like my husband and myself) brought wines they had not ever tried but that where highly recommended and fit the $50+ criteria.

The hosts of this event, a lovely gentlemen named Roger who graciously opens his beautiful home, and Orson Hall, the man behind the Atlanta Wine Meet Up are what truly make this evening special. Roger takes the time to compile a spreadsheet with everyone’s wine so that they can be scored (there are prizes!). Orson then numbers each bottle as it arrives to correspond with Roger’s list. They even take the time to compile this lovely graph, showing that scores got higher as the night went on …. hmmmm…. proving that wine makes everything better!

Of the 18 bottles brought to the event, only 2 were from outside of Napa Valley, one from Washington and one from Santa Cruz. My favorite of the evening was the 2009 Coupe de Foudre that came in 3rd overall. 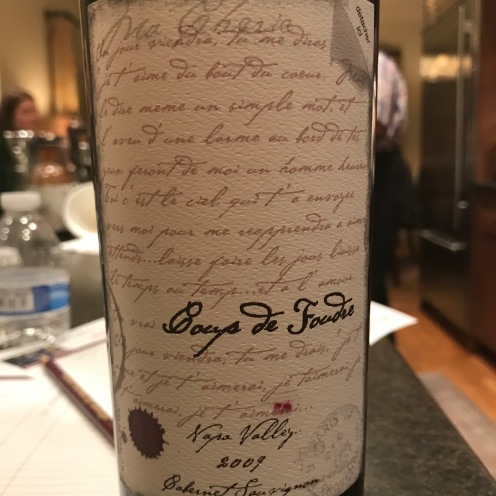 My husband and I brought a 2014 Barnett Vineyards Spring Mountain and a 2013 Corley State Lane Vineyard which ranked 11th and 16th respectively. Of the 18 wines, 2 had faults so technically only 16 wines were ranked. One of the faulted wines was a 1992 Beringer Private Reserve that I was so excited to try – but, sadly, its prime had passed. The other was a 2008 Gabrielle Collection Juxtaposition that was corked.

On a completely personal note, identifying flavors and aromas of wine is incredibly challenging to me and I’m not very good at it yet. As mentioned above, I used to drink Cabernet Sauvignon nearly exclusively and was one of those people that said “I don’t really care for white wine.” But, as I discussed recently (click here), I’ve been rather obsessed with trying anything and everything white and Rosé. I was shocked to realized that apparently my palette has started to appreciate more subtle flavors and nuances found in lighter reds, white and rose wines. While I still cannot describe this to you as well as I would like, the one thing I was able to taste in nearly every single Cabernet Sauvignon was alcohol. Well no shit, its wine right? But seriously, nearly all of them had that “hot” sensation on my tongue, which to my own personal preferences makes a wine seem a little out of balance. I have a hard time believing $50+ wines are out of balance, so it has to be that my palette has maybe become a little more sensitive?  Don’t worry, it’s not like I spit any of them out or anything;)

Personal epiphany’s aside, I can’t think of another way, other than to spend $1,000 over the course of several weeks, that I would be able to sample so many quality wines. Not to mention, a group of other wine enthusiasts to discuss and compare with just adds to enhance the experience even further. I will attend this event every chance I get, which luckily will be again this month! The wines will be red Burgundies. Stay tuned.