I have discovered lately that when I am about to open a bottle of wine and discover that it is a screw cap, I’m a little gleeful at the lack of effort required to get the wine into my glass. I admit to a slight prejudice against screw caps, so it is incredibly ironic that suddenly the laziness afforded by a screw cap makes me smile.

Why the preference for a real cork? I can’t say for sure.  I do like to keep my corks. What is it that makes people want to hoard their spent corks? To date, I have not seen anyone collect their screw caps, so what is so appealing about the little cork plug?

It turns out that cork is actually pretty special. Pliny the Elder thought cork trees to be divine, and at one time the bark could only be harvested by Priests. Is it possible maybe we somehow sense some sort of subliminal positive energy? You think I’m crazy don’t you? Read on, let me convince you.

Cork comes from the cork oak tree and farms are referred to as cork forests.  The

Iberian Peninsula is the world’s largest producer of cork, however, cork is also produced in Algeria, Morocco, Italy, Tunisia and France and even, in limited quantity Russia and the United States.

A cork oak cannot be harvested for the first time until around 25 years. After the initial harvest, trees can be harvested approximately once a 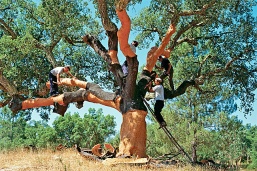 decade, 8-12 years, depending on the location of the tree. Harvesting occurs between May and August, during the trees growth cycle which makes removal of the bark, which must be done by hand, easier. The tree is not harmed in the removal of the bark and requires hand harvesting – machines cannot be used.

Hold on to your glass for this: the first harvest at 25 years does not produce cork worthy of making wine stoppers. No, this first harvest is used to make other cork products – flooring, etc. The 2nd harvest does not produce stopper worthy bark either and is again used for other things. It is not until the third harvest that the bark quality is suitable for use in making wine stoppers. So, if you want to get into cork farming, you better hope your offspring want to as well because that’s 50+ years before you get quality bark.

Cork is impermeable to gas and liquid, it is buoyant and does not rot. Trees are not felled in order to harvest, but the bark is required to be removed in order for the tree to maintain healthy growth. Trees can live to be 300 years old, although the average lifespan is around 150 years.

The first references to use of cork were in 3000 BC in Egypt and Persia, for use in fishing gear. Not long after, there are references to using cork to construct parts of boats and ships, in building structures and also for footwear! It’s leaves were consecrated to the Greek Gods Olympus and Jupiter and their branches were once used to crown victorious athletes.

Although an amphora containing wine from the 1st century BC was found in Ephesus and also amphorae were found in Pompeii sealed with a cork, somewhere along the way, oil soaked hemp became the norm for sealing wine bottles. Legendary Champagne producer Dom Perignon is credited with making cork stoppers the norm in wine production sometime in the late 17th century. It is said that it he got the idea to use cork to seal his champagne after seeing Spanish travelers use cork bark to plug their water gourds. True or not, we may never know, but it is from about the late 17th century that cork begins to replace oil soaked hemp as the bottle sealer of choice for wine. By the early 18th century cork forests are cultivated for the main purpose of creating wine stoppers.

Today cork forests are thriving and cork is used to produce too many products and materials to mention. The majority of cork forests can be found in Portugal, however, there are approximately 6.6 million acres of Mediterranean cork forest that span across Europe and north Africa. The Cork Forest Conservation Alliance (website) states that there is enough cork in Portugal and Spain alone to last 100 years. I found reference to cork forests in the United States but I could not locate any in my research. I found several cork producers, but it appeared that all receive their cork from Portugal. The cork oak will grow in the United States in Zones 9 & 10, with southern California being an idea climate. Something Americans haven’t capitalized on – how can that be?

Perhaps it is the long term commitment required and the decade long waiting period between harvests? Aside from that, following hand harvesting, the cork must be cured for 6 months, then boiled, then stabilize for 3 weeks and the undergo a second boiling. Cork is then sorted by quality with the highest quality corks selling for more than a Euro each.

About decade or so ago, the cork industry felt the impact of screw cap closures for wine. New Zealand and Australia use screw caps for 90% of their wine production. Chile and South Africa do as well. The plastic cork stopper also became a viable option for sealing wine. Aside from being able to be produced on demand and being cheaper, these bottle sealing options also eradicated any chance of cork taint. In response to this the cork industry invested heavily in research to detect cork taint and it seems to be working as cork is gaining market share once again.

China’s emerging wine market is playing a role in the cork industry. Some think that the Chinese will prefer cork, due to tradition. Other’s think that just like everywhere else in the world, young drinkers and other value seekers will not care if their wine is sealed with a screw cap or a cork.

Cork industry proponents believe that cork is the most environmentally responsible way to seal a bottle. They point out that the trees are not felled, the bark is harvested by hand and processed by air and boiling water. Cork is completely natural, recyclable and biodegradable. Plastic corks and aluminium screw caps are none of these things.

The Cork Forest Conservation Alliance has a recycle program called Cork ReHarvest. The corks cannot be recycled into new wine corks, but they are recycled and used for a number of different things, including cork bobbers for fishermen (throw back to 3,000 BC). Find a Cork ReHarvest box near you here.  The boxes are picked up at locations and brought back to regional distributions centers in trucks that would otherwise return empty, so no additional carbon footprint is made in the transportation of the recycle boxes.

So you see, cork truly is a pretty special natural resource. Just like some grape vines, cork oaks also, were planted and tended by people who may no longer be among us here on Earth. There is a belief I once heard that when humans use their hands to produce something, a part of their spirit lives in on in that thing. I think I heard that story in relation to slaves that made bricks and built buildings in coastal Georgia. I tend to believe this sort of thing. So maybe we do subconsciously sense something special in each cork. A human energy that is lacking in the production of most things in this modern era?

I can absolutely appreciate a screw cap and have enjoyed many quality wines this way, but I think I am going to agree with Pliny the Elder and believe that cork is divine.