Let me just say right of out the gate, my opinion is limited to one airline. I’ve lived in Atlanta for 18 years so your first assumption about which airline I’m flying is probably correct. I have no other complaints about this airline and they will continue to be my first choice in booking flights.

So, what’s my beef? The wine selection in the Main Cabin! I have been traveling alot recently – mostly between Atlanta and Cleveland, but my last trip was to Italy and when I saw the same exact options for wine as my Atlanta to Cleveland flights, I thought it was worthy of a discussion, because truly they could do so much better and it really wouldn’t be that hard. 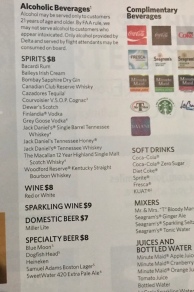 Before I rant, let me show you what I am talking about. This photo is actually from my international flight, but it is exactly the same options as my domestic flights. A fairly nice selection for beer and for liquor, but what do you see for wine? Red and White. That’s it! I originally assumed this was just what short, domestic flights had become and I can get over that. But when I boarded my flight to Italy and it was the EXACT SAME options, I was more than a little disappointed. 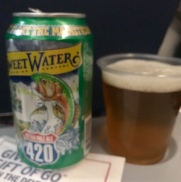 In fact, I ordered one of my favorite beers instead of choosing between the magnum sized unidentifiable red or white.

If you haven’t figured out my airline, let me assure you we are not talking about a discount airline. I am quite certain that the overall wine program for this airline is something that quite a lot of time and effort was put into. In fact, their website divulges that they take great pride in the wine options for the First Class Cabin. Those selections are carefully curated by an incredibly talented, award winning, Master Sommelier. Here’s a peak at an example of what’s available for a select few flyers:

Please don’t think I’m whining that I want First Class options in the Main cabin — I know that the difference between flying first class and coach is one of the few blatantly obnoxious differences in class and socioeconomic status still widely accepted in today’s society. It’s just that it seems to be an awful long jump from the First Class options to the Main Cabin options of Red and White. Surely there is a middle ground. I only include the First Class options to point out that, there is someone already on staff who has the knowledge and the capability to create a slightly better experience for us poor souls in the Main Cabin.

Would it be so much trouble to list Cabernet Sauvignon and Chardonnay? Or even a red blend and Pinot Grigio? With a recognizable producer? Would it? And if that answer is yes, someone please help me understand why, because as a self-declared wino, I find this to be incredibly frustrating. I want to know what I’m ingesting and Red and White just isn’t good enough. It’s not.

Not to mention, I don’t think I’m alone in my willingness to pay more for a wine that is recognizable. And if the lack of selection on international flights is because the drinks are free, let me just assure you that just because I can’t afford a first class plane ticket does not mean I wouldn’t allow a quick swipe to my credit card for a really nice Italian wine on my way to Italy.

I believe in the “if you’re not part of the solution, then you’re part of the problem” philosophy so, you know, if the Main Cabin doesn’t warrant the services of a Master Sommelier, then I, a mere CSW, would be happy to help this airline improve it’s Main Cabin wine list, because it does need improving and it really wouldn’t be that hard.

In the meantime, thanks for the great beer and liquor options.