The view from the porch of the former home of Martin Ray and current home of Jeff and Ellie Patterson.

Just over a year ago, I discovered Mount Eden Vineyards. It is total happenstance that I came across this winery when a complete stranger in the wine aisle at Costco recommended one of their wines – the Domaine Eden Pinot Noir (you can read about that here). 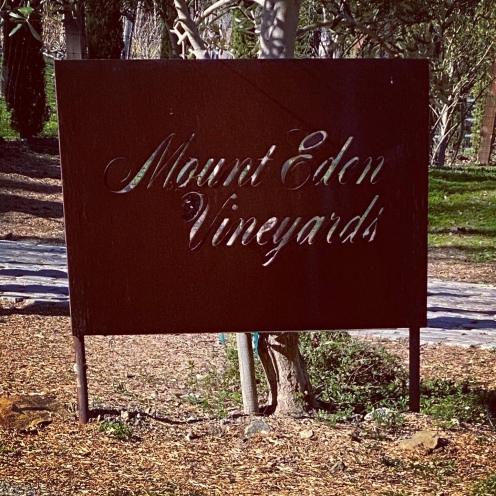 This winery has the kind of history rarely found in the U.S., and for me, it is always the story behind the wine that pulls me in. So, when my husband and I found ourselves in the area  recently, we had to make a visit.

To get to the winery, you have to make your way up to the top of Mount Eden, approximately 2,000 feet above sea level. There is a large metal sign at the bottom of the mountain announcing your arrival, but you’ll drive 2.2 miles up a very curvy road, from that sign at the bottom to the tasting room at the top. Did I mention the last bit of road is unpaved?

Our efforts were rewarded as soon we put the car in park, as we were greeted by not only the friendliest dogs ever, but Sophie, who is the daughter of the current owners and who grew up, with her brother, on this property. In fact, you’ll be standing on the front porch of their family home, where their parents still live, for most of your visit. With a glass of the Mount Eden Chardonnay in hand, you’ll take in sweeping views of Silicon Valley.

Mount Eden is located in the Santa Cruz Mountains AVA, which runs along the Pacific Ocean between the San Francisco Bay and the Monterey Bay and is largely defined by the fog line. Not as familiar to most wine drinkers as other California regions, the area it encompasses has a long and storied history in wine, much of which is tied to Mount Eden. 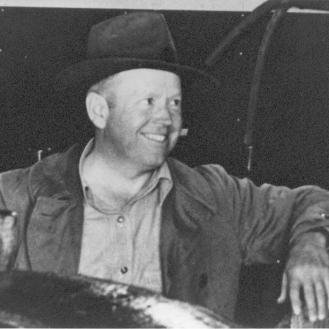 Jeffrey Patterson in his early years at Mount Eden. Photo courtesy of http://www.mounteden.com

Martin Ray bought the Mount Eden property in 1943, and immediately began cultivating the mountain top land into Chardonnay and Pinot Noir vineyards. Ray was a visionary who had learned winemaking at the side of Paul Masson, who was also a pioneer of California wine. Paul Masson had methode champenois sparkling wines from his Chardonnay and Pinot Noir vineyards with great success – something completely unheard of at that time.

Upon the repeal of Prohibition, Martin Ray bought the Paul Masson Champagne Company, even though Paul Masson tried to dissuade him, saying he should buy the land at the top of Mount Eden and plant vines there. It would take six years for Ray to take that advice, and what an important decision in California wine history it turned out to be. People still thought that making single varietal, non bulk wine in California was crazy, but like any visionary, Martin Ray wasn’t counting on the approval of others.

For nearly 30 years, Martin Ray  produced single varietal wines from these vineyards – the last vintage being in 1970. This history gives Mount Eden the distinction of having the longest lineage of estate bottled Chardonnay and Pinot Noir in California and it solidifies Martin Ray as a true pioneer of California wine, paving the way for all that followed.

I had read that Mr. Ray partnered with the wrong investors which resulted in him being ousted from the partnership. My recent visit to Mount Eden Vineyards added a little insight that Mr. Ray became quite eccentric in his later years which probably contributed that decision. With Martin Ray no longer in the picture, the winery was renamed Mount Eden Vineyards in 1972. Over the next nine years, the winery would be the home of several winemakers that would go on to become very well known – Merry Edwards and Richard Graff, for example.

In 1981 current owners Jeffrey and Ellie Patterson came to Mount Eden. Jeffrey was an assistant winemaker, then winemaker. Currently, the Pattersons are the majority owners and they still live in the home on the property, originally built and occupied by Martin Ray.

Jeffrey Patterson now has nearly 40 years of grape growing and wine making experience on this property. The children that grew up on this mountain are now adults and involved in the daily operations and winemaking.

Jeffrey’s wines, his first vintage I might add, inspired late artist Ron Tanaka. Mr. Tanaka created poems and photo journals that are now forever a part of the tapestry of Mount Eden. From the website:

Ron Tanaka came into our lives unannounced one day in 1983 having fallen in love with our 1981 Pinot Noir. His arrival marked the beginning of a special friendship that has resulted in two exhibitions of poems, photography and hand made paper collages. As a third generation Japanese American, his vision of blending the spirit of the East and West and his unwavering enthusiasm has changed our perceptions of the winegrowing lifestyle and the role of product art in 21st century.

You can read the poems here, and see the series of photographs and short verses that documented growing up on Mt. Eden from the view point of Sophie, here. 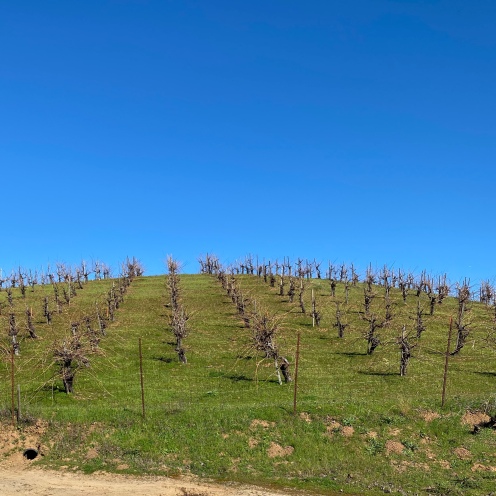 Modern viticulture has been employed over the years and grape growing looks different now than it did when Martin Ray first planted vines here. The vineyards are completely dry farmed, and solar panels provide the source of much of the energy used.

When we visited for the Weekday Tour and Tasting, we tasted through three current release wines: 2016 Mount Eden Estate Chardonnay, 2016 Mount Eden Estate Pinot Noir, and the 2015 Domaine Eden Cabernet Sauvignon. We were also able to see the original cellars underneath the Patterson’s home and hear the incredible history of the winery and vineyards from the perspective of one of the people who knows it better than anyone.

Tastings have only recently been available to the public and they are by appointment only, you can book your visit here, with the option of the weekday tour or a more involved tour available only on the weekend.

With a little encouragement from Sophie, a bottle of Mount Eden Vineyards 2007 Cabernet Sauvignon made it into my suitcase, and I’m happy to report it made it home safe and sound.

An incredible history, both past and present. Wines that are transcendent, inspire artists, and cause complete strangers to recommend them to you in the wine aisle.

I believe it is rare  to come across something so special.

Vines with a legacy to Burgundy and Bordeaux, a unique fog dictated cooler climate, and a winemaker that has spent 40 years learning the exact nuances of the land he grows grapes on, make the Mount Eden wines extraordinary.

When I posted the 2015 Domaine Eden Pinot Noir, wine on my Instagram,  Prothro Family wines in Napa Valley posted this comment. I think it speaks volumes that other winemakers feels this way about Mount Eden.

like a lot of people, I have had the opportunity to drink a lot of wine. Most of it is great for the time. Few are memorable. Even fewer are transcendent. @mountedenvineyards 2004 Estate Pinot was transcendent…a remarkable wine I had when it was 6 to 8 years old. I have been a fan ever since. One of the few wine Clubs I belong to. Also…their cabs…excellent especially if you like SCMV cabs. The history of the estate is interesting and dates back to the original Martin Ray vineyards, which tie back to the original Paul Mason operation in Saratoga.

In preparation for our visit, I tracked down a bottle of the 2015 Mount Eden Pinot Noir, which wasn’t too hard, but it did have to be special ordered from a local wine shop. 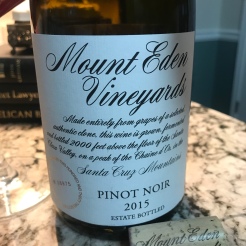 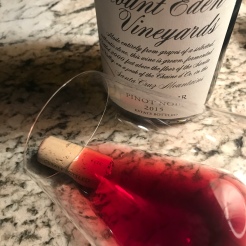 The first thing you notice about this wine is the stunning color, a gorgeous, crystal clear (with no fining or filtering), read-through ruby color.

I decanted for an hour before I couldn’t resist and poured a little sip, by the end of the bottle decanting was closer to 4 hours.

There were aromas of both red and dark fruit, with a hint of minerality and something that made it seem somehow savory. On the palate this wine feels like silk rolling over your tongue, with flavors of cherry, blackberry, tea, spice and both a minerality and meaty note. The flavors and aromas changed as the wine opened and the night went on, with baking spices making an appearance. The finish was so long that I’d dare to say there is no finish on this wine, it lingers with you for as long as you’ll let it.

The grapes for this wine were harvested in the first week of August 2015, and that’s not a typo. That gives us some idea of the unique climate on top of Mount Eden. The wine was aged in French Burgundy barrels, 50% new/50% one year old. It was bottled in August of 2016 and I’m quite certain this wine could hang out in your cellar for many, many years to come.

We paired it with a grilled/smoked salmon and roasted green beans. It’s meals like this, with wines like this, that make me prefer staying home over going out.