Literally translated Saint’s Wine, but commonly referred to as Holy Wine, VinSanto is a bit of an enigma wrapped in a conundrum. I say this because so many things about the wine vary, depending on what you are reading, or who you are talking to. Everything from it’s origin, the grapes, to it’s name (and how to spell it: Vin Santo; Vinsanto; VinSanto), can vary. Even the fact that it is a dessert wine is debatable, as some versions are bone dry. 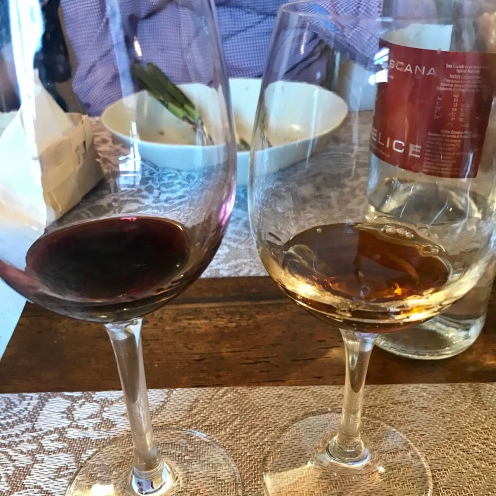 VinSanto on the right.

My introduction to VinSanto came on trip to Italy in 2018, during a tour and lunch at Fattoria San Michele a Torri, in the Tuscany region. The lunch was an amazing affair with meats, cheeses, and eggs all from animals raised on the property, but that’s another story. The wine is most commonly known from the Tuscany region, however, 26 of the 41 Italian DOC’s allow production of VinSanto. The island of Santorini is also known for VinSanto, and in fact, the EU recognizes Santorini as it’s birthplace, although I wouldn’t want to debate this fact with an Italian. 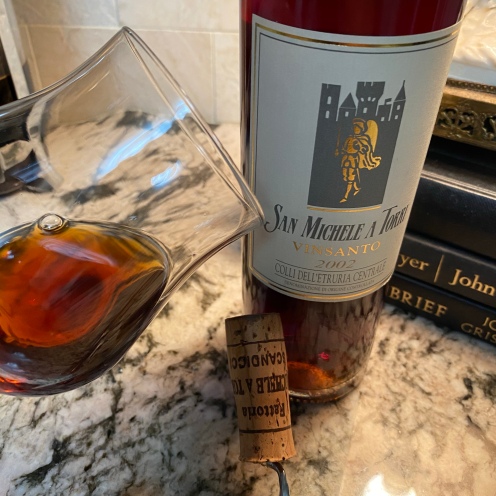 My husband and I recently opened a bottle of VinSanto that we brought home with us from our Tuscan lunch. Drinking VinSanto is an experience. A slow wine if ever there was one. It is a feast for the eyes – such a deep, dark amber color – it immediately grabs your attention. The aromas and the flavors are equally unique and intense – but we’ll get to these later.

Why is this wine called Holy Wine? There are several theories on this, here are the most common

If you can decide on how you’d like to spell VinSanto (its interesting to note that San Michele a Torri spells it Vin Santo on their website but VinSanto on their label), and which origin story you’re going with, your next question might be what exactly is it, what grapes make a VinSanto? If we go with Tuscan producers the wines will be made from a majority Trebbiano and/or Malvasia grapes, unless they are producing the lesser known rose style of VinSanto (called Occhio di Pernice), in which case Sangiovese grapes are used. Other regions use grapes indigenous to that region.

Regardless of location, the grapes must be dried prior to pressing. Once harvested, the grapes are placed on straw mats, or hung from rafters to dry – literally like a raisin. Except in Santorini, where it is required that the grapes dry outdoors, in the sun. This is not an uncommon practice of wine making, known as passito, or straw wine, this style of wine has been around for nearly as long as wine itself. It results in wines that are either higher in residual sugar, or alcohol, sometimes both. These qualities lead to wines that have a long shelf life, even after opened. That didn’t turn out to be an issue for us, we found it to be a lovely nightcap and finished our bottle within a few days of opening it.

Perhaps the thing that makes these wines truly special is that they are fermented for at least 3 years, and more often than not, from 5-10 years. The wine is aged in smaller barrels called Caratelli, historically sealed with a cross to indicate the Holy Wine contents. These barrels are not kept in temperature controlled cellars, but rather are stored in areas that experience the environmental fluctuations – 3 to 10 years of hot summers and/or cold winters. Once the barrels are sealed, they cannot be opened until the wine is ready to be bottled – it can’t be checked on, topped off, etc. Can you image? Pretty mind blowing.

The production process – putting it a barrel and leaving it to the mercies of nature for both weather and fermentation is another reason the wine may be called Holy Wine. I wonder how these things were decided …. perhaps an underground cellar was not available, but who decided to let it ferment for years without checking on it? Do you wonder these things, or is it just me?

Traditionally served with biscotti (called cantucci in Tuscany), it is considered a great way to end a meal, as well as a traditional welcome plate. Our bottle from San Michele a Torri, begs you to drink it alone in the middle of the afternoon. Taken from the website:

This wine is the pride of San Michele. It is a result of hard work that involves a lot of energy, time and space. The most common Vin Santo is to be dipped with biscuits, however ours on the contrary, is best to be sipped alone. Its has a rich olfactory appearance and has an amplitude of scents ranging from honey to dried fruits. The ethereal notes are an important part of its structure and it is a good wine to just sip and enjoy.

We believe this wine is best in the middle of the afternoon while reading a good book or listening to music. Besides this type of pairing we also think it tastes great with blue cheese, goat cheese and pate. 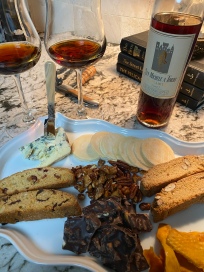 I couldn’t agree more. I paired the wine with a few things, my least favorite of which was the biscotti, my favorite (hands down) was  a creamy blue cheese – absolutely divine.

Here are the details on the wine.

The grapes are harvested and placed on overhead indoor racks to dry, until the grapes reach a sugar concentration of around 40%.

The grapes are crushed, and then undergo a second press. The must is then placed in the smaller Caratelli barrels to begin the 3-5 year fermentation.

The color of this wine is so amazing! It had intense aromas of toasted nuts, almond, honey and raisins. The aromas are reflected on the palate, along with other dried fruit flavors like fig and apricot. Oxidation is notable, giving it a fortified wine note, but at 16% that might not be unexpected. The wine is full and creamy, with a bitter note – like coffee – that just gives it another level of flavor and nuance.

The blue cheese with this wine was life changing. Seriously.

Have you experienced VinSanto? I’d love to hear about it!